When I Was the Jumpingest Boy on My Block

I loved jump roping. As a kid growing up in Miami Beach, it was something I excelled at. I could jump forward, backward and even criss-cross the rope side to side as I leapt through the loop.  Whenever my female classmates were jump roping or if there was a competition to see how many we could do in a minute, I was game.

I jumped so well that I won a few trophies and ribbons from the Miami Beach Parks and Recreation Department when I was in the after-school and summer camp program at Muss Park. That caught the attention of The Miami Herald which featured me in a small profile about my jumping rope skills.

I was 10 at the time and I remember the reporter Laura Misch visited our apartment. She sat with me in our living room and gently asked questions about what I loved about the sport and my future in it. She was respectful, sweet and really really pretty. She probably wanted to write about something more serious and bigger than a story about an effeminate boy with dark brown hair who was happy with a rope in his hand. But she made me feel like I was important that day and her sole focus. She genuinely seemed interested in knowing me.

After I happily showed her my collection of trophies, I then showed her what I could do. We stepped  outside my two-story apartment building. A Herald photographer Michel du Cille later met up with me and I showed him what I could do too. With my white rope in hand, I jumped fast, hard, the rope and my arms a blur in motion.  I remember I jumped so much that afternoon that my calves ached into tight balls of pain.  (Below is the photo that used with the story.) 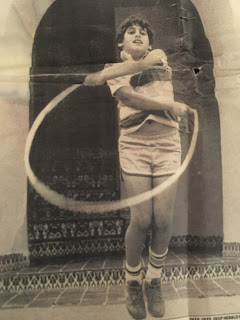 A couple of days later on May 22 in the Sunday Miami Herald Beach Neighbors edition, there I was on page 14 under a section called "Portrait of Beaches People." My parents were so proud and especially my Tio Frank (Uncle Frank,) my mom's brother who was a boxing coach in Cuba and Venezuela where his boxers trained by jump roping. I remember he bought a stack of the Herald and told people about his jump roping nephew.

After the story was published, my classmates' moms and my teachers congratulated me when they saw me at North Beach Elementary or at Muss Park. (Back then, The Miami Herald was everywhere, dotting practically every household lawn and filling newsstands on every business corner, and I felt like everyone from Miami Beach to Bay Harbor Islands, the coverage area of Beach Neighbors, saw the piece.)

Below is the text of the story that the Herald published about me. I never got to see Ms. Misch again but I never forgot her professionalism and how she captured the spirit of a 10-year-old boy through her short 333-word story or what we call a "brite" in journalism.

Coincidentally about four years later, I joined the school newspaper at Miami Beach High. Less than two years later, I began working as an intern in the same Neighbors office she worked out of.  I began writing about Miami Beach's unsung heroes and colorful personalities like she did. I wanted to make the people I wrote about feel the same way Ms. Misch made me feel about me, that they mattered and their story was important, something I continue to do today at The New York Times.

Tell him there's no future in jumping rope and 10-year-old Johnny Diaz just smiles and bounces on. And on. And on.

He's the jumpingest boy on his block, in his school, maybe the world. Johnny Diaz is a rope jumping fanatic. While other kids his age catch fly balls and go for touchdowns, Johnny likes the simplicity of a piece of rope, a place to jump and his own boundless energy.

He practices three hours a day, sometimes, jumping fast and slow, forward and backward, arms crossed and arms rigid. Before he saved up and bought his own rope, Johnny practiced his routines with an electrical cord.

He's already worried about being a has-been in a little kids' game. In fourth grade at North Beach Elementary, he's a year too old to win any more trophies. He's also getting heavier, and that spells the end for any serious rope jumper. He was clocked once at 200 jumps a minute. Now the best he can do is 155. You've got to be light on your feet.

But Johnny has memories. The trophies and ribbons, more than 20 of them, sit on his parents' dresser. He won his first trophy at Muss Park, in first grade. It was the beginning of an unflagging enthusiasm for the gentle art of jumping rope.

The kids tease him.

"But I don't care because I want to be a champion jumproper." Jump. Jump. Jump.

He knows he won't make it. He realizes, in the twilight of his rope jumping career, that there are other possibilities in the world.

"Tennis," he said, "is what I plan to play." He also collects coins and stamps.

There was one kid at school who told Johnny in so many words that anybody who spent his time jumping rope was a fool.