Catching up with "The Old Man and the Sea"

I was about 13 the first time I read "The Old Man and the Sea" by Ernest Hemingway.  It was a class assignment for my English class at my junior high in Miami Beach. The book was an easy read, pages filled with simple sentences that were powerful in their description and emotion.

The story of Santiago, an old fisherman down on his luck (84 days without a fish) always stayed with me.  Mr. Hemingway captured the spirit of dogged persistence as Santiago went head-to-head with a large marlin off Cuba's shores. He also showed a fatherly love between Santiago and a boy who looked up to him for his fishing prowess and who wanted to learn everything he knew about fishing and American baseball.

Looking for something new to read, I stumbled upon this book at Barnes and Noble. The thin white and blue book sat at the end of a table under a sign that read "One Sitting Reads."  It seemed to call to me and I smiled as I picked up the book and began leafing through it. I had to buy it.  I wanted to see if this tale still held the same magic I had experienced all those years ago.

It did. Mr. Hemingway transported me to the small beach town where Santiago lives in a shack sparse with personal belongings. I felt like I was on the skiff with the old man for two days as Santiago wrestled with the 18-foot marlin and eventually towed what was left of it back to shore. (Those damn sharks!)  The reader can taste the salt and feel the heat that Santiago experiences on the skiff being so far out to sea. 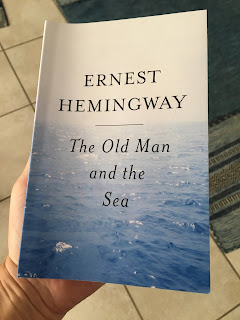 The simple sentences packed with so much color hooked me (so to speak.)  Descriptions such as "a great island of Sargasso weed that heaved and swung in the light as though the ocean were making love with something under a yellow blanket" and describing a dolphin as "true gold in the last of the sun and bending and flapping wildly in the air."

I was 14 when my cousin's husband took me out one early Saturday morning to Watson Island in Miami where we boarded a large boat called the "Blue Sea II" with about 20 other people looking to catch some fish.  We ventured off the coast of Miami to a point that we could barely see the downtown skyline in the distance. After bobbing on the boat for an hour or so, I remembered suddenly feeling a tug on my line, so strong it almost pulled me over the rail.

I was excited and scared and nervous, not sure what to do but others gathered around me and cheered me on. After a few minutes of leaning forward and back, pulling my rod and reeling in some line, I plucked the fish out of the dark blue water. I did it!

There was a middle-aged couple who congratulated me and the wife offered to take a picture of my prize. She was kind of enough to mail it to me. I received the photo and nice note in the mail about a week later. And below is that photograph. 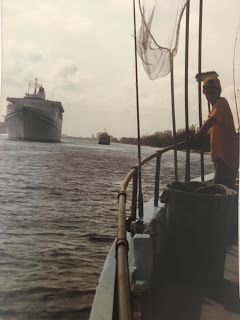