Wilton Manors is known as South Florida's LGBT capital and the second gayest city in the US. The island city next to Fort Lauderdale has a large population of gays and lesbians who walk hand in hand along Wilton Drive or while dining out along the strip. Whenever I visit a close friend there and pull into the city limits,  it's as if there is a giant rainbow hovering over this part of Broward county. The rainbow flag sails mightily in front of storefronts, bars and people's homes.

So it's not a complete surprise to learn that the Wilton Manors Police Department has resdesigned one of its patrol cars to reflect the large LGBT community it serves. It's the police department's way of showing its pride with this new ride.

I wrote a story about the patrol car, decorated with large rainbows on each side, for the Sun Sentinel. The rear of the car reads "Policing with Pride."

The car is a 2013 Ford Interceptor and officers will feature it at community events such as Pride Fort Lauderdale and the annual Wilton Manors Stonewall Parade and Street Festival.  There has been a spirited debate on Facebook among people celebrating the police department's community outreach with the colorful car while others wondering whether this was a good use of funds. Below is a photo of the car featured in the Sun Sentinel. 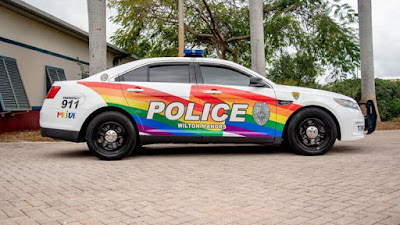 Miami Beach also has a patrol car with "POLICE" decorated in rainbow hues. The Ford Crown Victoria is used at community events such as the annual Miami Beach Pride festivities on Ocean Drive.. (Photo below from Miami Beach PD) 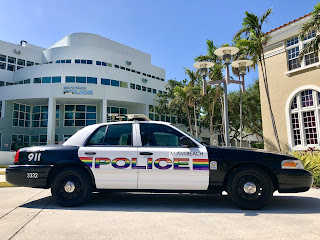 And three years ago, the Orlando Police Department also unveiled a police car with a rainbow-hued heart to honor the 49 people who were fatally shot during the 2016 Pulse nightclub shooting. The police car was called No. 49. The names were listed on the back window and hood. Photo below from Orlando Sentinel. 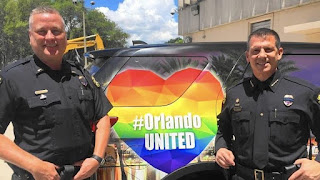