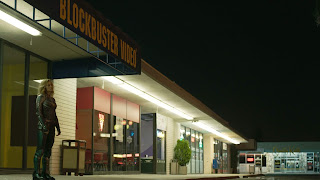 In an early scene in the Marvel movie "Captain Marvel," the super heroine drops out of the sky and crashes into a closed Blockbuster Video store on Earth (or Planet C-53). She lands between the "Family" and "Drama" sections, not far from a poster for the movie "True Lies."

After she gets back on her feet, Captain Marvel, out of curiosity, picks up a copy of "The Right Stuff" tape before she steps outside and discovers its 1995.

After watching the movie this weekend and reading news reports about the one and only remaining store on Earth, I was flooded with a rush of Blockbuster memories. Once upon a time, I was a Blockbuster Video employee.

From the ages of 19 to 22, I worked at Blockbuster. At the time, I was a part-time college intern at The Miami Herald where the pay was okay but not enough for my expenses. The additional income from Blockbuster helped me purchase books for college (Miami Dade College and FIU), supplemented my nights out clubbing in South Beach (Warsaw, Score and Twist) and helped with my car payments (my little Toyota Tercel.)

I started working at the Art Deco Blockbuster store in 1992 not long after it opened in South Beach. The store's outdoor sign had that "Miami Vice'' font and the exterior lights glowed pastel pink and blue which also matched the interior walls and carpeting. I also worked briefly at a Hialeah store when one of my favorite managers was promoted there. But I spent the most of my time working in Miami Beach.

Three times a week for my 8 p.m. to midnight shift, I donned a blue long-sleeved chambray shirt (or Polo) and khaki pants, the designated work uniform.  My duties mostly consisted of sitting at the return box and catching tapes that customers popped into the box. Then I’d scan them, stack them in a tall neat pile and carefully returned each box to its “ New Release” shelf.


It was a process I repeated several times during my shift. I also had to create new membership cards for new customers. When we closed the store to customers, we had an hour to vacuum the carpet, mop the tiles around the registers, clean the bathroom and make sure that every movie was neatly placed behind its cover box on the shelf where it belonged. Oh, and there was the tedious task of counting all the candy and restocking them.

Despite my duties, I had a lot of fun on the job with my wing girl Cindy. Near the register, there was a microphone. Every once in awhile, we'd get on it and make the Ch Ch Ch Ah Ah Ah sound from the Friday the 13th movies which made us giggle. Our manager Chris also liked to get on the microphone to bark like a dog to confuse customers which also made me laugh.

I think the reason I know so much about movies today was because I was surrounded by so many of them back then. Whether they were old or new, I knew their titles, year of release and their shelf categories by heart. One small perk of the job: we got to take home the movie posters once the new release was old. (For me, that was the poster for Julia Roberts' "Dying Young" with Campbell Scott.)

Working at this store, which was in the heart of South Beach at 15th Street and Alton Road, allowed for fun celebrity spotting. We tried not to make it obvious (but we did) when Jim Carrey and Courtney Cox stopped by in 1992 (on break from shooting “Ace Ventura: Pet Detective" in Miami Beach.) One of us (it wasn't me) got on the microphone and sang the intro to "In Living Color" the Fox sketch comedy show that he was known for at the time.

Gloria Estefan and Chayenne were regulars at the store, too. And I got to see many of my former high school classmates who walked in searching for blockbusters like "Jurassic Park" and "Alien 3."

Years later when I moved to Boston to be a reporter at The Boston Globe, I continued my treks to a Blockbuster in my Dorchester neighborhood. (I also went to Hollywood Video in Quincy.)  As the chains began to fade, I reported on their closings for a Business feature.


When I moved back to Miami Beach after 10 years in Boston, I often visited my old Miami Beach Blockbuster for the nostalgic thrill of strolling along the tall, white shelves to find the latest DVD. When the store and others in Miami and around the country closed in 2013, it was the end of an era and a movie rental tradition that really began for me at the Art Deco Blockbuster. 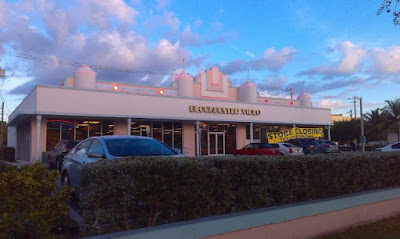