Looking back at 'Queer Miami'

Before visiting the new "Queer Miami" exhibit, I thought I knew my local LGBTQ history. I assumed the exhibit would focus on Miami's first gay Pride event in 1978, lead up to the 1980s AIDS crisis and then highlight the more recent legalization of same-sex marriage.

Boy, was I wrong.

The exhibit was so much more comprehensive than I had anticipated. It looks back at more than 100 years of LGBTQ history in Miami and Miami Beach from the early Florida ordinances that criminalized homosexual and transgender behavior to the impact of gay/lesbian immigration in the Magic City.

I recently wrote a Sun Sentinel article about the HistoryMiami Museum exhibit which was curated by University of Massachusetts Amherst history professor and Miami native Julio Capo Jr.  Housed in a sprawling 5,000-square-foot gallery in the downtown Miami museum, the exhibit uses a mix of historical records, news articles, video testimonials and memorabilia to tell the story of gay Miami. 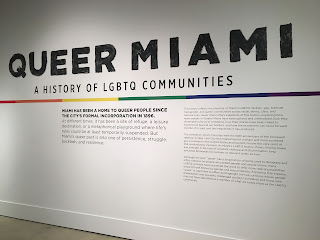 While I'm too young to remember some of the things that were pre-1980, there were a couple of displays that really jumped out at me and transported me back to my childhood and college days.

One section centered on the police raids of early Miami Beach clubs and bars that catered to gay and lesbians.  In this part, there was black and white surveillance film of 21st street beach at Collins Avenue in Miami Beach. The footage showed throngs of men sunbathing and lounging.  An enlarged photo captured two men hugging on the beach by the lifeguard stand.

Growing up on the beach, I remember my parents warning me about this area because of the maricones (fags in Spanish) when I'd go bike riding after school and on weekends. 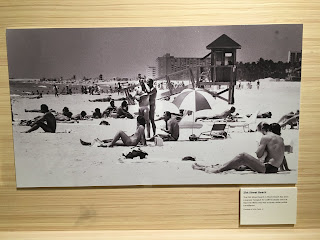 In middle school and then high school, I was a regular at the  Miami Beach Public Library which was located across from this beach. I remember seeing men strolling up and down the street and meeting up with one another. Although I didn't make the immediate connection then, I knew this was their spot.

Venturing deeper into the exhibit, I rounded a corner and my eyes landed on a familiar face -  the late Cuban-American AIDS educator Pedro Zamora. A photo of him smiling with his arm around his father bedecked the top of a display case about Florida's AIDS crisis. Below the photo was The Miami Herald's front page obituary about Pedro's legacy in raising awareness about HIV/AIDS.

I've written some blog posts about Pedro over the years because I saw a lot of myself in him. We were born around the same time and we grew up as gay men in conservative Cuban families in South Florida. So this part of the display was sweet and sad at the same time, like a seeing a long lost old friend. 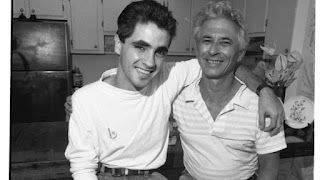 Another display celebrated The White Party fundraiser. T-shirts, programs, fliers and passes to the HIV/AIDS fundraiser for Care Resource filled the glass case. The memorabilia whisked me back to my first White Party in 1998 at Vizcaya Museum and Gardens in Miami. For the occasion,  I bought white jeans to match my white long-sleeved shirt.

I had heard so much buzz about the annual gala that I wanted to experience it. When I walked into the historic home and explored the manicured maze of lush gardens, I was struck by how everything from the guests' fashion to the elegant table decorations and chairs was awash in white. Everyone was in a celebratory mood, sipping wine and drinking to a good cause.

A vibrant installation of ribbons in rainbow hues awaits visitors at the end of the exhibit. Visitors here are asked to share their own story on a card and to then post it on the wall.

I was only at the exhibit for an hour (I got there at 4 p.m. and they were closing at 5 p.m. so I was rushing somewhat.) But I plan to return to soak up more of the history.

The exhibit is up through Sept. 1, 2019 at HistoryMiami Museum, 101 W. Flagler St.  To read more about the exhibit, visit my Sun Sentinel article here. 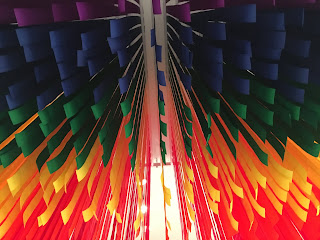