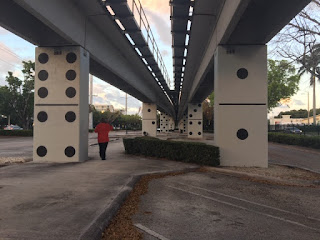 Across from the University of Miami campus in Coral Gables, giant dominoes have been rising. The black and white game pieces are being splashed on the pylons under the Metrorail line, creating an artsy domino effect in the neighborhood (where I go running almost daily.) 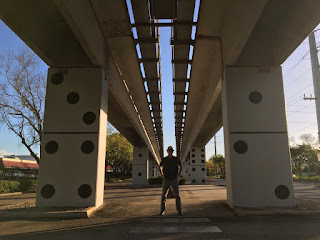 I wrote a story about the art installation called "Concrete Landscapes Miami" by Australian artist Bo Droga (picture above standing between the dominoes.)  He gifted the project to Miami-Dade County to help brighten the drab concrete columns that people drive or walk by every day. The creative pieces add a lightheartedness to the area while breathing life into something that otherwise looks boring and bland. Call it cool urban art. Domino, parked. 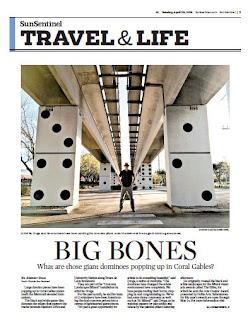 In general, dominoes are popular in Miami especially among Cubans and Cuban-Americans. We've grown up playing the game, matching the numbered rectangular tiles with family and friends. Little Havana is also home to the infamous Domino Park where mostly older men and women gather daily to play games for hours on end. Before my dad died last year, he played dominoes with fellow residents of their nursing home. Inbetween meals and other activities, the residents sat at round tables where they carefully placed each game piece to match the numbers. I remember hearing the click-clack of the tiles during each round and their laughter (and a groan) when someone won.

As people learn about the 18-foot-tall dominoes in Coral Gables through social media or by simply being in the area, they are stopping by and taking selfies (including me.) 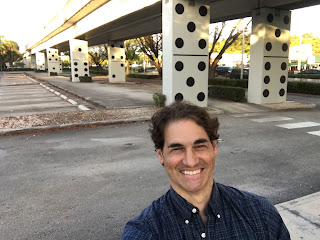